Basic Orthogonal Traversing Bots, or BOT-Bots, are robots programmed by the Professor to carry out specific but simple tasks.

The first variety encountered follow predetermined paths, usually outlined on the floor. They hold a small platform above their head where they can carry a safe or other object.

Another type remains stationary and holds an inactive laser. It then activates the beam whenever an object other than the player passes in front of it.

Some BOT-Bots are programmed to hold a plate in front of them and stand in a row with other bots. These are then all triggered by objects breaking a nearby blue laser beam, causing the phalanx of robots to charge forward several meters before returning to their starting positions.

The Professor will comment that although he programmed them to only perform specific tasks, he sometimes wonders if they may be sentient. 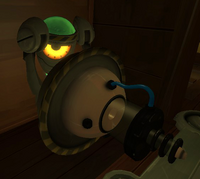 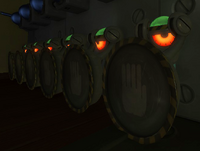 These BOT-Bots will rush forward pushing anything in their way when triggered
Add a photo to this gallery
Retrieved from "https://quantumconundrum.fandom.com/wiki/Basic_Orthogonal_Traversing_Bot?oldid=5425"
Community content is available under CC-BY-SA unless otherwise noted.